The Live Oak, genus Quercus, is a general term for a large number of species of Oaks that are still green during Winter when other Oaks, such as Red Oak, White Oak, Water Oak and others are bare and dead looking. They do shed their leaves periodically, especially in the spring, but are never totally bare.

The species virginiana, usually found in Georgia and the Southeastern US, is also Georgia’s State Tree. Some live to be several hundred years old, partially because they are both strong and flexible. Those qualities led to their use in shipbuilding, especially in keels and knees, where strong curves or angles were important. For that reason, the genus was almost depleted in Europe, so the new and abundant supply in Colonial America was important, before the widespread use of iron or steel.

Savannah’s two best known big oaks are the Majestic Oak, found in a residential area by the same name, off LaRoche Ave. near Savannah State University, and the Candler Oak on the property of the original Candler Hospital, a pre Civil War hospital located on Drayton St. 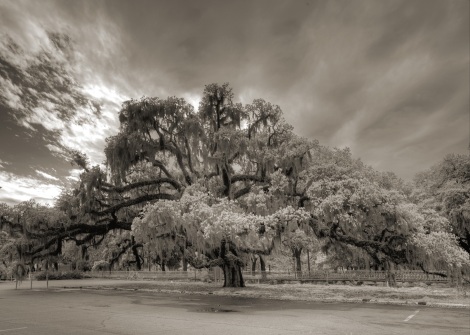 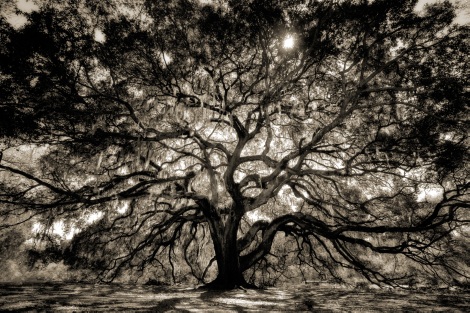 On Georgia’s barrier islands, long a source for the big oaks, many were either harvested for the shipbuilding industry, or cleared for farm land. However, they are regenerating, and some of the large old trees remain. One of the best known, although easily missed in the heavily wooded setting, is Ossabaw Islands “Big Oak”. Estimated at around 850 years old, it is one of the oldest living oaks, but is in rapidly deteriorating health. 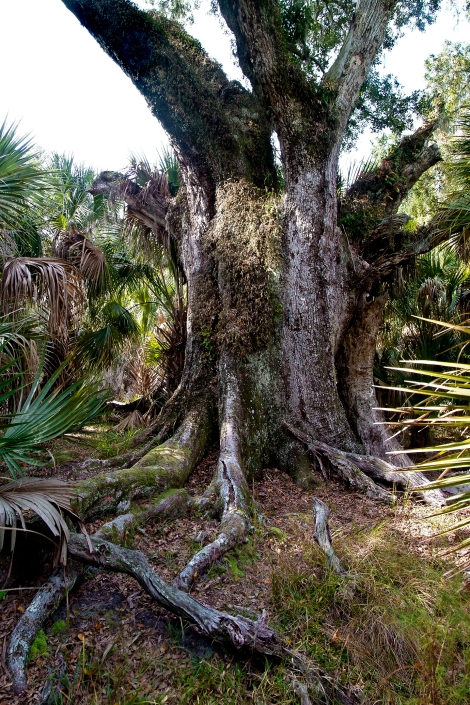 The “granddaddy of all live oaks” is the Angel Oak on John’s Island, near Charleston SC. At an estimated 1500 years old, it is the oldest thing, living or man made east of the Mississippi. It has limbs 11 feet in circumference and the trunk is over 25 feet in circumference. It sustained heavy damage from Hurricane Hugo in 1989, but has recovered and is healthy again. 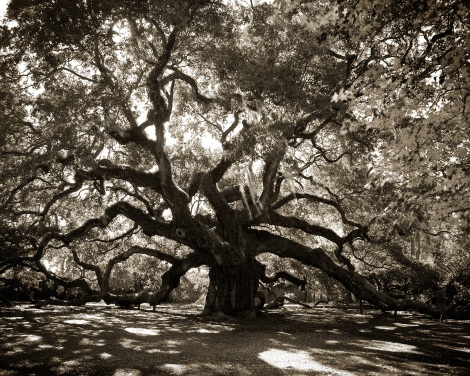 In addition to the Spanish Moss and Resurrection Fern which are most often associated with the old oaks, they host little ecosystems of mosses, lichens, ferns, vines, insects, and animals. Some of the remaining Plantations have impressive canopies of live oaks lining their entrance drives. Some of these are now between 200 and 300 years old, and are very impressive. The most famous of Savannah’s such drives is at Wormsloe Plantation on Isle of Hope. The trees were planted in the mid 1700’s, and go on for more than a mile.

The urban canopy for which Savannah is well known is also comprised mostly of live oaks. Some of our streets are long canopies of live oaks, and visitors from other parts of the country are astounded by our trees as well as our history.

One response to “The “Live Oak”, Georgia’s State Tree”